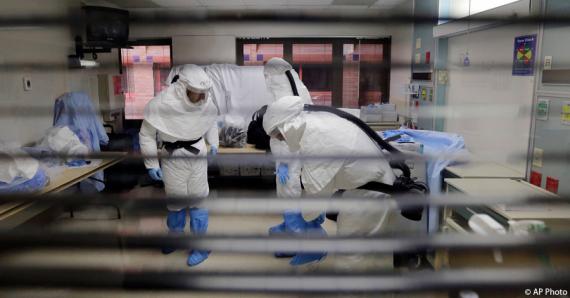 U.S. Department of State Engages African Diaspora Communities on the U.S. Response to the Ebola Crisis
In October, the State Department’s Bureau of Public Affairs, along with our interagency colleagues, hosted a conference call with over 200 members of the African diaspora community to discuss the U.S. government’s response to the Ebola crisis.  Individuals representing Sierra Leone, Liberian, Nigerian, Senegalese and other diaspora communities participated from several states across the country, including Maryland, Minnesota, Connecticut, and Arizona.  U.S. government officials provided call participants with an update on the U.S. government’s response and listened to their ideas and suggestions about how the government can coordinate with African diaspora communities across the United States.

Here are some frequently asked questions expressed by participants:

Q: How is the U.S. government engaging African diaspora communities in the United States?

A: Agency officials throughout the U.S. government are working together to engage diaspora communities via conference calls, speaker presentations, social media events, and by sharing timely and accurate information about what is happening on the ground and the U.S. government’s response efforts. The interagency conference call with diaspora communities the State Department hosted earlier this month is an example of this outreach effort.

We are also helping to connect individuals seeking to volunteer as healthcare workers or in other capacities with the NGOs working directly in the Ebola-affected communities in West Africa.  We continue to look for opportunities to engage the diaspora community and appreciate any input or suggestions that individuals or groups may have.

Q:  What is being done today to help neighboring countries of the Ebola-affected countries to improve readiness for this disease?

A: The U.S. Agency for International Development (USAID) is working alongside other government agencies to develop an Ebola Preparedness Strategy that will assist countries in developing Ebola preparedness plans, identify capacity needs and gaps, and that will provide technical assistance to meet those needs.  The strategy will align with recently released preparedness guidance from the World Health Organization (WHO) and build on existing national preparedness plans.  To date, two U.S. government-supported regional preparedness workshops were held: one in Abidjan, Cote D’Ivoire (September 22-23) and another in Accra, Ghana (October 7-9) — with a third workshop planned for Douala, Cameroon (November 4-6).  The workshops will cover at-risk Francophone and Anglophone countries is West Africa.  The workshops will be followed-up by coordinated U.S. government technical assistance to address capacity needs and gaps identified during workshop discussions.

Q: Is there a plan to have a central platform where diaspora members can contribute financially to this effort?

A:  The diaspora community has an important role to play in the larger international effort to combat this epidemic.  Anyone who wishes to contribute financially to the relief effort can do so by supporting the NGOs working directly in Ebola-affected communities in West Africa. A list of NGOs working in West Africa is available here.

For those who would like to give to specific programs or interventions, GlobalGiving has a microsite for the Ebola crisis here.

Furthermore, those who would like to make a monetary donation can find more information at the following USAID’s Center for International Disaster Information (CIDI) website here.

Q: How is the United States working with the African Union to combat this epidemic?

A: We are working very closely with our colleagues in the African Union to respond to this epidemic.  They have been critical to the effort.  In fact, recognizing the need for qualified healthcare workers and with up to $10 million in support from the United States, they quickly moved to send trained responders to West Africa.  We are also encouraging other African countries with capacity to send responders to join this global effort.

Unfortunately, we were unable to answer all of questions raised during the conference call, but you can find additional information about the U.S. response to the Ebola outbreak in West Africa at www.usaid.gov/ebola.  To receive updates, email us at publicoutreach@state.gov to sign up for our mailing list.

About the Author: David Duckenfield serves as Deputy Assistant Secretary of State for Public Affairs.